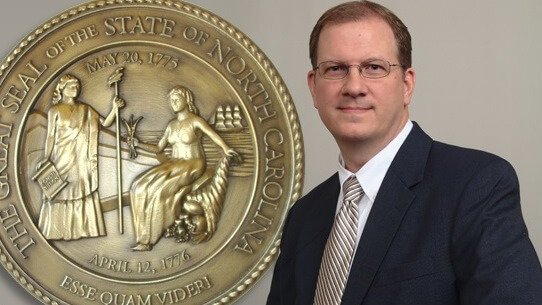 At the Law Office of David E. Sherrill we are dedicated to helping clients throughout Guilford County who need legal representation. Whether you received a speeding ticket, were accused of a criminal offense or are dealing with a difficult family law matter, we work diligently to achieve the best possible outcome for our clients.

David is a North Carolina native. He grew up in Cabarrus County. Following law school, he moved to Guilford County to pursue a job as a medical malpractice attorney. After several years of practice, he opened the Law Office of David E. Sherrill. David developed his legal skills for 13 years and then became a District Court Judge in Guilford County. He has now reopened his law firm and continues to serve his clients throughout Guilford County.

That was the short version, but that is not where his professional journey began. Even before pursuing a legal career, David developed unique skills not often brought into the courtroom that have served him well as an attorney and a judge.

David graduated from North Carolina Central University School of Law, where he was an active member of the mediation team. He started the school’s first negotiation team, which progressed through the regional finals and competed in the American Bar Association’s national finals. He was also named to the list of Who’s Who: American Law Students in 2000 and 2001.

Following law school, David began his legal career working on complex medical malpractice cases. He later started his own firm where he handled a wide range of both civil and criminal cases in all district and superior courts. Particular concentration of his practice was placed in criminal defense (misdemeanors and felonies), domestic (family law) and juvenile (delinquency and child welfare) cases. Practicing in all those areas exposed him to precisely the areas of law needed to effectively preside over district court cases and prepared him well in his transition to become an effective District Court Judge. David took those past experiences with him, with the knowledge of what the parties are going through, and rendered decisions that were both fair and legally sound.

He enjoys helping people navigate through the confusing legal process at a time when they are going through some of the most stressful times of their lives.

Every day, David draws from his broad base of unique professional experience and with that perspective, developed over many years, applies his experience in representing his clients in a way that shows understanding, develops trust, and gets results.